Magics is dynamic, vibrant, and community-oriented. Walking into the restaurant is like being transported into the ocean itself, beautiful and invigorating, with a priceless view. We’re more than just a restaurant, our passion for our island, fresh flavorful food, and craft drinks, coupled with strong community ties and our relationships with our farmers, fishermen, and producers all combine at Magics. 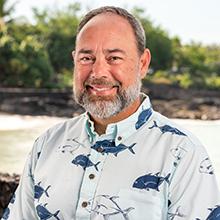 Having called the Big Island home since March 1997, Mattson purchased the future location of Magics Beach Grill in 2017 to create an energizing gathering place for the North Kona community. Mattson has decades of experience in the restaurant and beverage industry, including serving as the former President and CEO of Kona Brewing Company. He believes personal relationships are the foundation of any great establishment. “When someone comes to Magics, whether they’re local or visiting, we want them to feel part of our ohana and develop a connection to the culture,” says Mattson. Mattson lives fulltime in North Kona with his wife Thalia and son Lincoln- his son Thane attends Western Washington University in Bellingham, WA.

A Bit of History 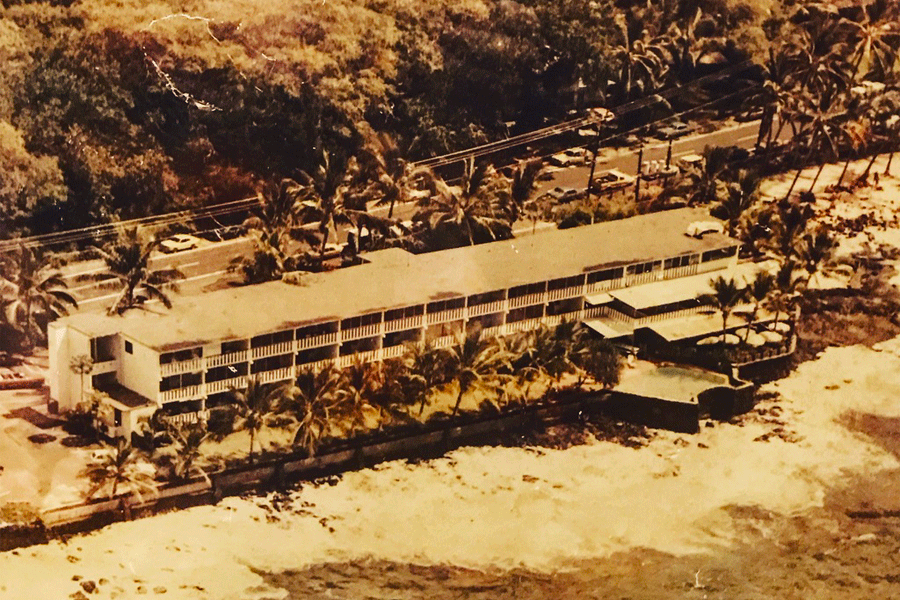 The building dates to 1965, and our corner spot was called Magic Lanai Restaurant & Mermaid Bar. But, among locals, the venue was probably most beloved as Dorian’s, the area’s go-to spot for last call. Pat and Susie Dorian owned and operated the restaurant and bar from 1975 to 1985, and Pat was a legend: a stunt double for Elvis Presley, and who regularly hung out with the Beach Boys in Waikiki. Under their tenure, Dorian’s was known for potent martinis, the Silver Platter, musicians George Naiopi and Aunt Betty often played impromptu shows, ukuleles strumming away, despite the venue’s lack of a music license. “You couldn’t buy the quality of the entertainment they had,” remembers former bar manager Dick Hershberger. 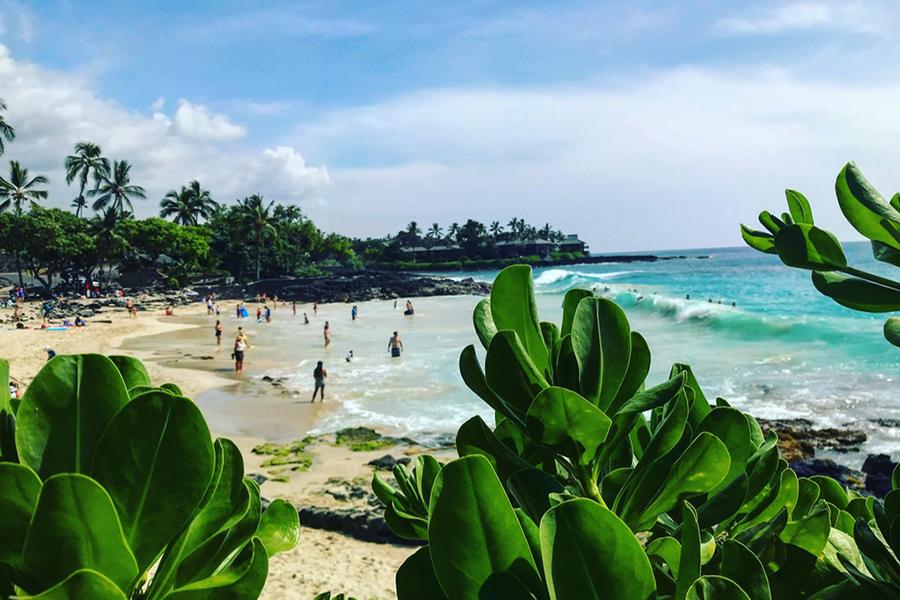 We have strong ties with the Kipapa Family and their relatives, who have lived in the area around Magics Beach Grill for centuries. King Kamehameha IV bestowed the land to their common ancestor Kipapa in 1854 and over generations, they fished and crafted canoes along the coastline, especially on what is now called Magic Sands Beach (formerly Keoneohuihui). They grew Kalo (taro), ‘Ulu (breadfruit), and ‘Uala (sweet potato), and the moon cycle dictated all farming activity, much like biodynamic farming today. We embrace and support their role and kuleana, one’s personal cultural responsibility to uphold the integrity of the land we occupy.

We are aiding the Kipapa Family in its endeavors to protect their wahi pana (sacred sites) at Kipapa Park, located across the street from Magics Beach Grill. In 2012 the County of Hawai’i purchased six acres of land from landowner Lucille Kingman Trust, later that same year they purchased an additional 10 acres adjacent to the first parcel. In 2013, the Kipapa Family was the first family in Hawai’i to co-author, propose and receive approval for a burial treatment plan from the State of Hawai’i Historic Preservation Division (SHPD) and the Hawai’i Island Burial Council. In 2014, the Kipapa family members signed an agreement with Hawai’i County to continue to rebuild the connection to the place as a family. Most recently, the Kipapa Family applied for a grant in order to secure funding to continue stonewall restoration, upkeep of the site and landscaping plans for the protected six-acre parcel.

In 2015, the Kipapa Family and members of the community reinstalled the family Pōhaku Kū’ula (Fishing Stone), located in the Ahupua’a of Pāhoehoe at Lae o Huihui. The monument centers on one female, or “hina,” stone and one male, or “ku,” stone, each weighing close to a ton. It represents an energetic magnet to attract fish into the bay so the families can live off the sea. The reinstallation took place over one weekend during the spring equinox also known as Piko o Wākea, and during this three day endeavor there were set kapu (restrictions) and cleansing preparation that was observed to ensure the safety and validity of the restoration work. From the first day of the ritual, a female whale stayed in the bay as the guardian of the activity. She gave birth on the same day of the reinstallation and erection of the Kahua (platform) in which the Kū’ula Stone is installed. With help from the community, the Fishing Stone was reinstalled, and named in honor of the former name of the beach area, Keoneohuihui and the Hina stone supporting the Kū’ula stone was named in honor of the mother of Kipapa, Kaupehe. Both stones fit perfectly together. 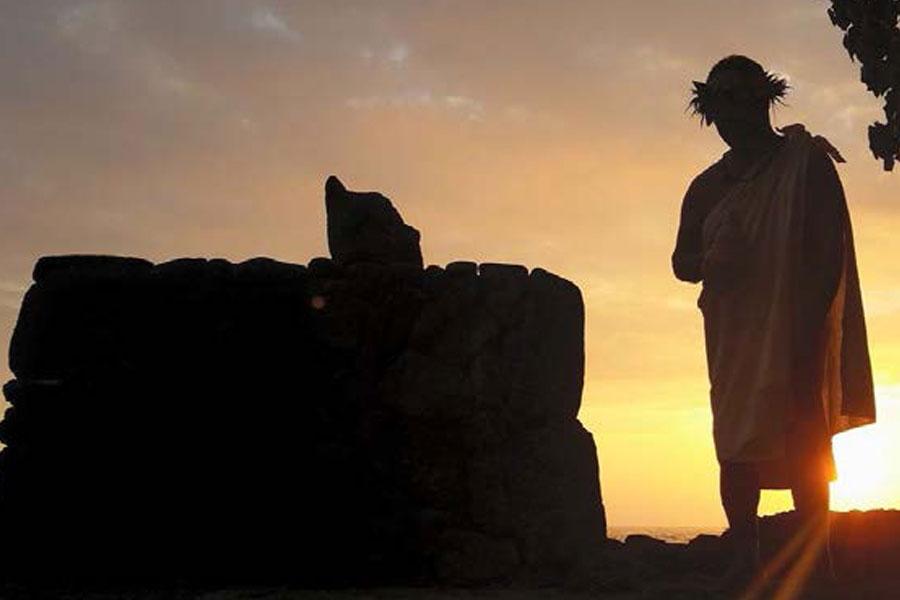 The Oral History of North Kona

Respected Hawaiian elder Kumu Keala Ching has dedicated his life to preserving the oral history of Kona, and we are so thankful he has taken the time to share it with us here. Though many stories have been lost, Kumu Ching says North Kona has always been seen as a place of enlightenment. Hawaiian chiefs would travel from all across the island of Hawai’i to seek answers to their greatest questions. Their destination was likely a heiau, or temple, within the North Kona District.

“The chiefs would have come to figure out if they were on the right path, such as whether or not to go to battle,” says Kumu Ching. “So North Kona seems to be that place of blessing, seeking of knowledge.”

The district immediately north, Pahoehoe, also offered enlightenment. Pahoehoe takes its name from the smooth new lava that defines the area, and Kumu Ching believes ancient Hawaiians would lie down on the pahoehoe to search for answers or healing. In so doing, they would feel the energy that comes from the land through the lava’s smooth, gently rippled texture, as though one’s body were a canoe on the sea.

The Pahoehoe district’s southernmost point is home to Magics Beach Grill. It was one of many important canoe building and fishing areas up and down the Kona coast (read about the Kipapa Family, who lived here for generations, in the previous history section).

Farther south sits the Kapala’ala’ea district, which runs all the way down to North Kona’s southernmost point, Pu’u Ohau. Kumu Ching believes ancient peoples visited this area to confirm their vision of enlightenment will benefit the earth and future generations.

“Kapala’ala’ea could mean an imprint of the journey to independence,” says Kumu Ching. “Going back to the story of the chiefs, here was the place to find out if the path they’ve chosen is really the right one. Am I leaving an imprint that is significant for the rest of history?”

Something that unites the entire Kona coast is its sunsets, and the people of Hawai’i believed you could always align within yourself if you faced the cardinal sun. In this way, every sunset is a chance to find new understanding, a chance to heal.